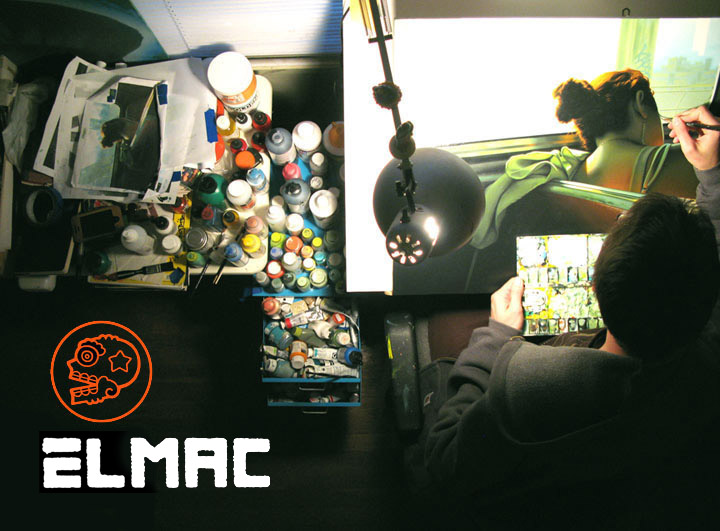 ?: Does the presence of an audience have an effect on your work?

El Mac: I’m not sure. Concentrating is more difficult with an audience but music helps with that.

?: Does it motivate you? Or intimidate you?

!: Maybe both? Neither? I feel a lot of pressure when painting even when nobody’s watching..but there is that element of being on the spot. I’m an introvert so it’s a challenge.

?: Did you pay attention to what Augustine Kofie was painting?

!: Yes, but not too much, since we were painting separate pieces. I was trying to stay focused. He’s a good friend and crewmate of mine, so I’m always happy to see him paint.

!: No. We’re friends, and we were painting very different things.

?: What’s to be done with your piece?

!: It was sold that night. The money is supposed to go to an organization called WellDone, which helps provide clean water to underdeveloped parts of Africa.

?: What’s your next mission?

!: Kofie and I painted a fast, small mural outside the Project Room. Now I’m in Dublin Ireland where I’ll be painting soon. Then I paint a mural in Hawaii after that, then Singapore, then possibly Saigon. Then I have to paint like crazy for a solo show this fall in New York City… After that I’d like to find a cave somewhere and meditate.